Yooka-Laylee was heralded as a revival of the much loved platforming genre of gaming. In theory it was impossible to get wrong. Fans have been desperate for a Banjo-Kazooie sequel, and Yooka-Laylee promised to be the spiritual successor.

Playtonic Games was the studio selling this dream. Comprised of a lot of the team who previously worked at Rare, they even got composer Grant Kirkhope back on board to create the music. What could go wrong?

Apparently, quite a lot.

For those who don’t understand the core concept of the genre, it can be distilled into one objective – collect all the things! Every task, every conversation and every fight ultimately is done in the aid of collecting an object that further progresses the game.

In this instance, you are collecting Pagies – golden pages from a magical book that have been scattered across worlds and are used to then unlock new worlds. In addition to Pagies you are also on the hunt for Quills, which can be used to buy news moves from Trowzer Snake – yeah, I know. 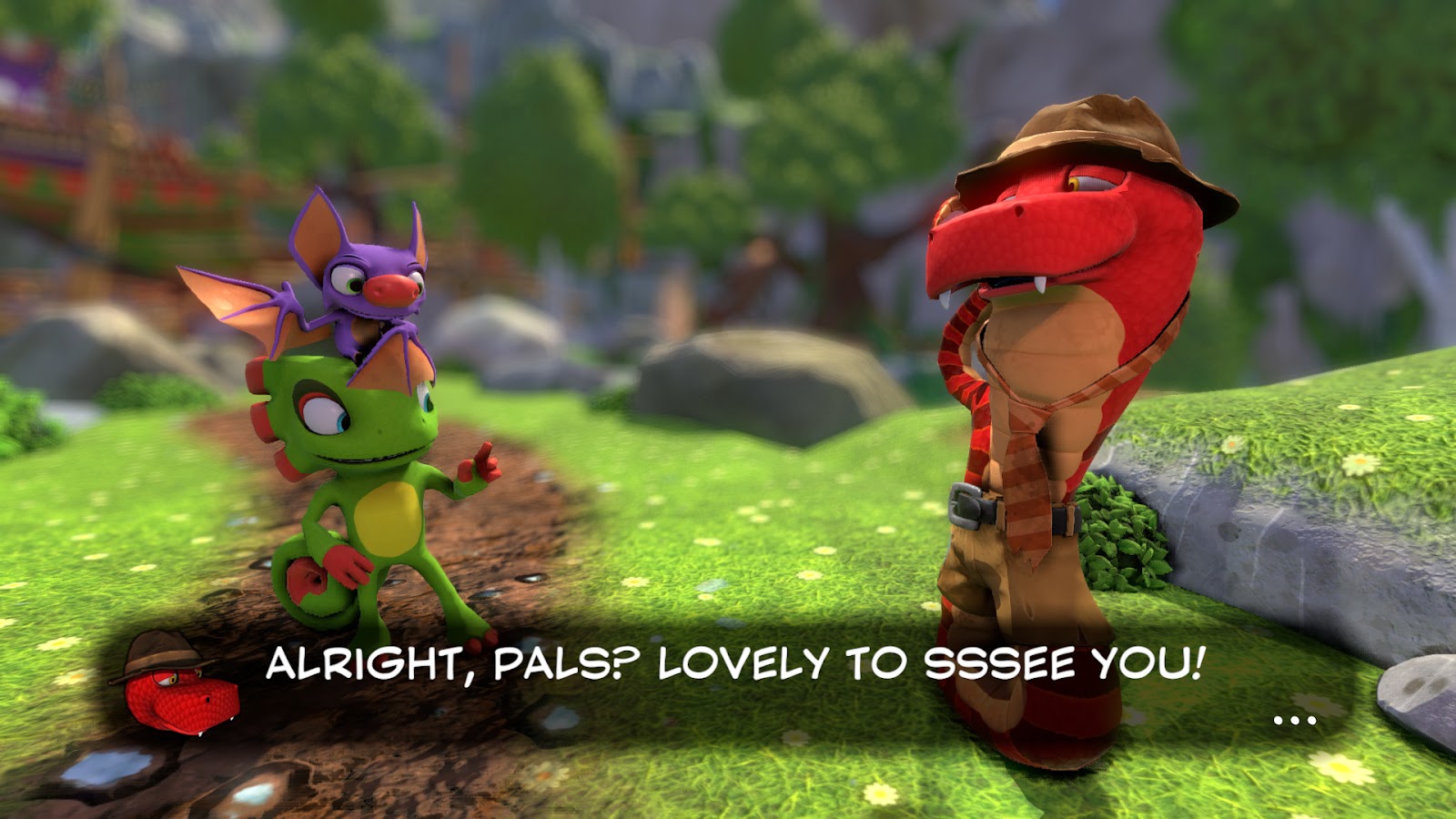 Upon starting the game you are introduced to both the main antagonist Capital B, and our hero duo Yooka and Laylee. The former is a chameleon, and the latter a bat. All three, and every other character in the game, produce the most grating sounds ever. What was mildly amusing in 1998 is now absolutely infuriating. The single syllable noises with pitch changes will very quickly become grating, and while some of it is skippable, not all of it is, and that is a mistake. You will quickly want to rip off your own eyelids to use as earplugs just to escape from the interminable ‘eh, ehhh eh ehh’. Yooka in particular sounds particularly creepy, boarding on the profane.

The game also very quickly drops the pretence of having a fourth wall, and instead goes for the ‘I know i’m a video game and will constantly riff on that’. This too cool for school approach to dialogue has been happening for a while, most obviously with Sunset Overdrive. I fear it will only become more popular due to the success of four wall vaulting Deadpool, and writers will think they’re clever for things like “Unlike those soft shooters our health won’t auto-refill…”. No, instead you make us eat butterflies, but you can also run into them to recharge our energy bar, and the amount of times I’ve accidentally ran into them when trying to eat them is beyond count.

“You may have seen us on the box-art”

While on the writing, I felt with Yooka-Laylee it was trying too hard. Everything had to be a pun, often with a school playing field level of intelligence. The sassy bat, much like Kazooie, has to display its ‘attitude’ through witless comments and insults against other characters, generally playing off of their appearance or an animal based pun.

The next in the myriad of mistakes is the design of the ‘puzzles’. Puzzles should be fun and entertaining, with a degree of satisfying challenge that makes you feel like a success when you complete them. The puzzles here aren’t fun as much as exercises in frustration. The game appears to actively antagonise the player with challenges that are less about clever design, and more about repeatedly bashing your head against a wall made of nails. Often the challenges boil down to nothing more than ‘get to x point before the time runs out’, which quickly becomes old. The satisfaction comes not from overcoming the challenge, but knowing you won’t have to do it anymore. 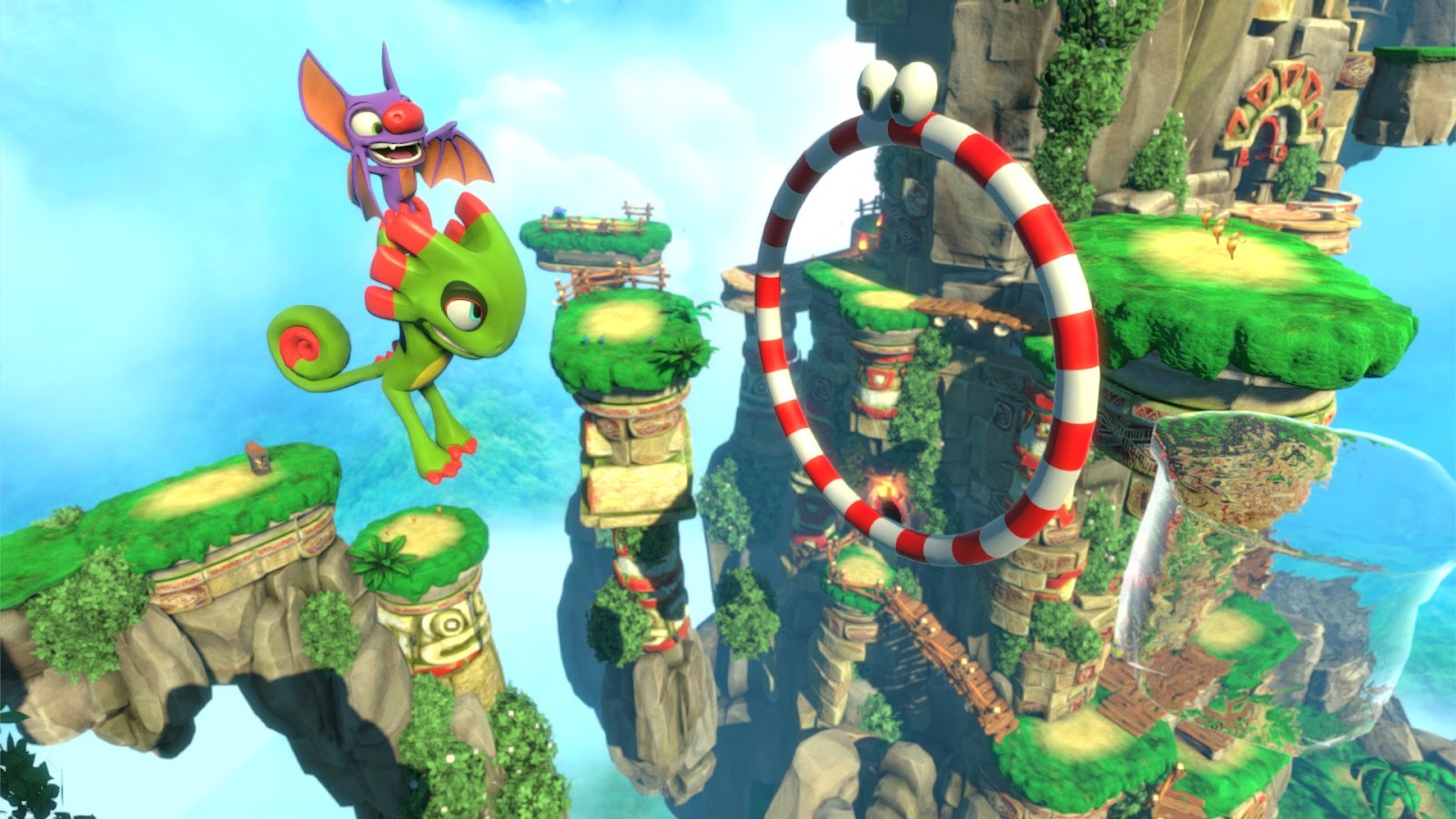 The same is true of the boss fights. The first you’ll encounter requires you to roll up a ramp, jumping over logs, before attacking the boss. Upon doing that you are instantly blown back down the hill and have to do that a further two times before you finally win, the whole time struggling with a poor viewing angles.

Another occurs in a castle that adopts an isometric view in an attempt to recapture that retro feel. In addition to once again going on too long, the fight was difficult on a more basic level because the angle was such that the boss could disappear off screen and you couldn’t see him!

Indeed, the camera is one of the more challenging villains in this game, taking your input more as a suggestion than a command. It will wildly swing around all on its own, and any attempt to position it may or may not garner the results you want. On occasion it might lethargically move to a somewhat useful position, but it won’t be long before it once again decides it knows best. A patch has already released to fix camera issues, but it hasn’t gone far enough yet.

Even when not battling the wandering camera or spongy controls, just finding where you’re meant to be going next can have you swearing at the TV. The hub just makes no sense. I don’t know quite what they were attempting to go for, but it was just a frustrating, convoluted mess that seemed to punish the player for wanting to play.

That being said, the game does have a couple of redeeming features I do have to give credit for.

For starters, the game does look good. In fact it looks great! The team did a fantastic job of creating big eye-catching worlds. They do on occasion feel slightly unfinished and empty, but at least they look good while doing it. That is of course, when the game isn’t stuttering. For some reason, often around fire, the game will start dropping frames, almost coming to a standstill for a second before it then catches up. That’s annoying at the best of times, but when the puzzles require a degree of finesse and the controls aren’t overly cooperative it becomes outright excruciating. 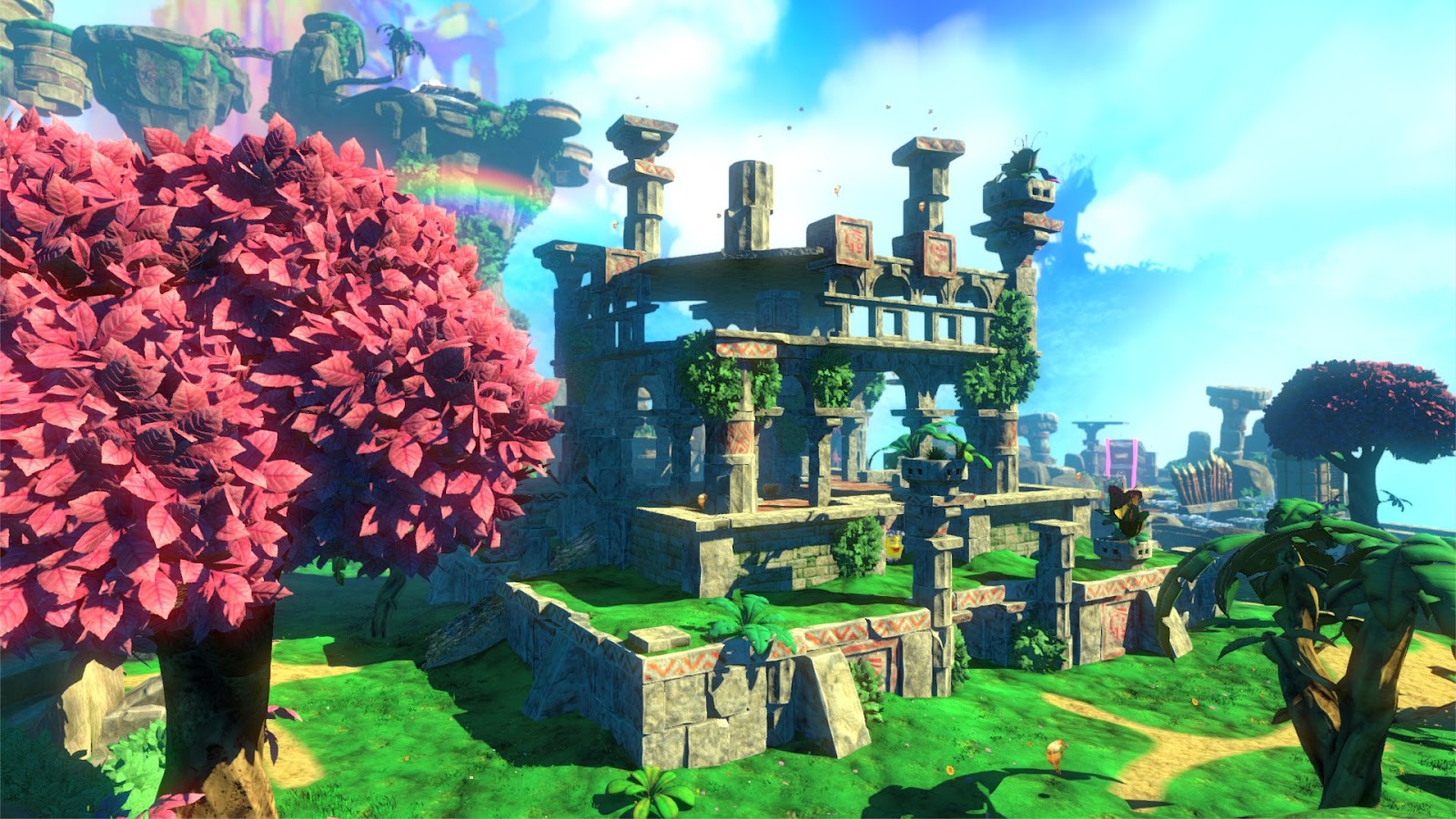 I did like – initially – how the game presented a fallacy of choice to the order in which you could complete it. Rather than go sequentially through world one, beat the boss and move on to world two and so forth, you could dip into world one, get enough Pagies to open world two and then immediately bale. As with everything though, that turned out to be somewhat hamfisted. The fallacy comes from the fact that you have to collect 100 Pagies before you can get to the final boss, meaning you have to go back and complete the asinine challenges you hoped you could skip. Going back comes with the benefits of an advanced range of abilities, that you’ll actually need to collect some of the Pagies – not that the game is particularly forthcoming in telling you that. The lack of invisible walls presents a degree of liberation, allowing you to jump up to areas they perhaps didn’t intend for you to access, meaning you can get some Pagies early on. By the same stroke though you might be left infuriated that you can’t reach what appears to be an easy Pagie because you haven’t unlocked a certain move, which could require first unlocking four other worlds..

The game is so wrapped up in what could be, it fails to ask what should be.

Yooka-Laylee was pitched in every way as a spiritual successor to Banjo-Kazooie. But the finished result doesn’t really achieve that. A successor suggests something that will further the conversation. It should have everything that people loved in a game, but more importantly seek to fix the frustrations and issues. It should build upon the past, not stay in it.

The game comes of more as a clone than a successor, or perhaps fan-fiction. It’s so in love with the source material that it fails to identify or fix any flaws. In fact, it goes so far as to only further compound everything that is annoying about a platformer. It feels like a wholesale clone, a game that has ripped everything from Banjo-Kazooie; from the menus, to the sounds, to even the core concept. There is nothing original here. Yet, somehow, despite its best attempts to mimic, it never really steps out of the shadow of its predecessor, and fails to capture any of the soul or fun.

I was very excited when I first saw the Kickstarter for Yooka-Laylee. I believed that we were due a revival of the classic genre of my childhood. But now it’s here I’m thinking perhaps it’s best remembered with the rose tinted glasses on. 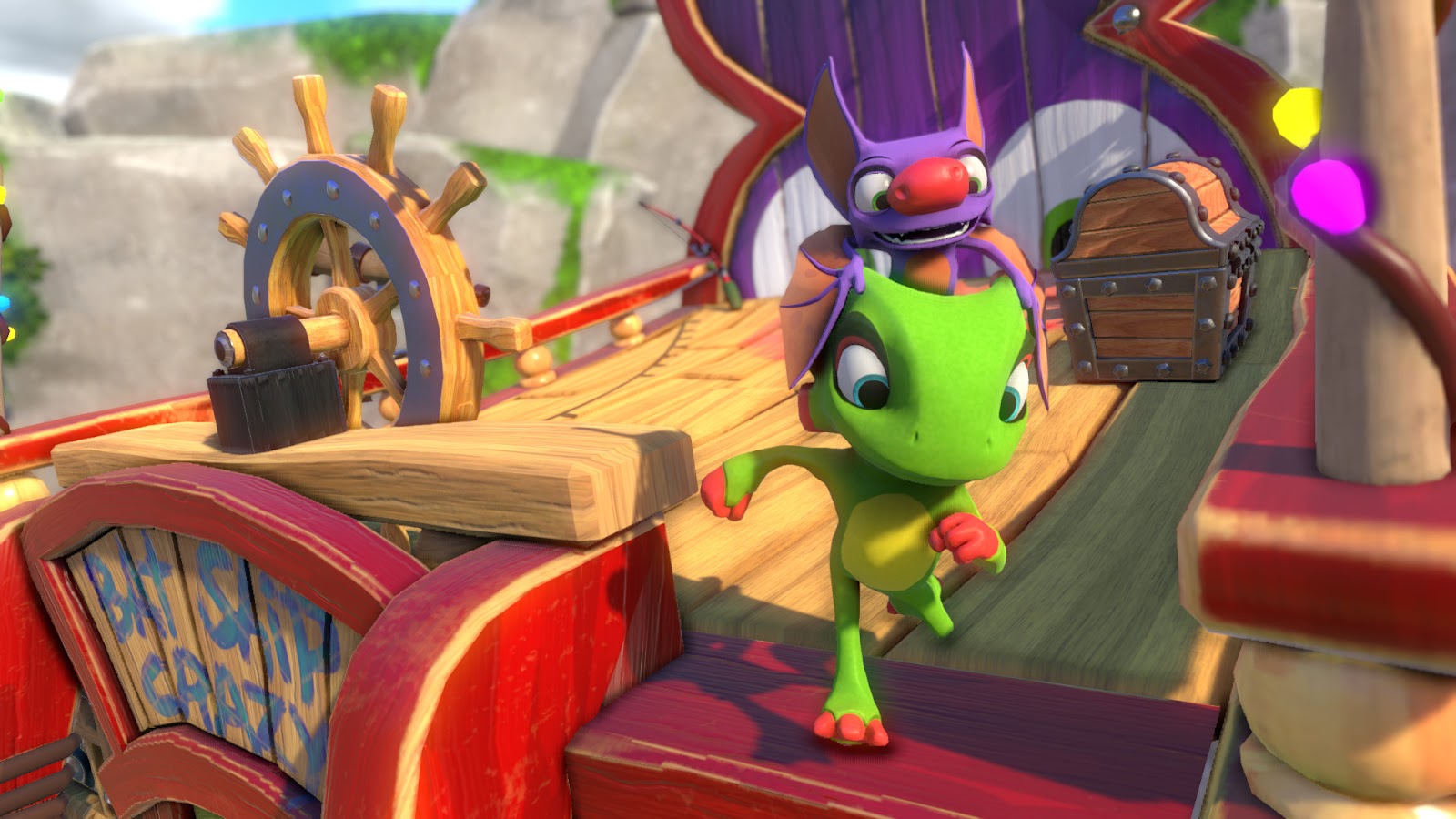 Disclosure: The author was a backer of Playtonic’s Kickstarter campaign.

Reviewed with a retail XBOX One code.