I never got around to playing Skyrim on the last generation of consoles. I was often recommended it, and actively pushed to buy it, but at the time I refused to believe I would enjoy it.

However, after pumping literal days into Fallout 4, I was more receptive to the idea of dipping a toe into the world of Elder Scrolls. The results? Impressive.

The first thing you find about Skyrim Special Edition is that it is an incredibly beautiful game. Bethesda has gone back and remastered the art, and added volumetric god rays, dynamic depth of field and more. This makes for a very pretty game, with an environment that beacons out to you. You have the option to completely hide the HUD, which allows you to take gorgeous screenshots – perfect for desktop or console backgrounds. 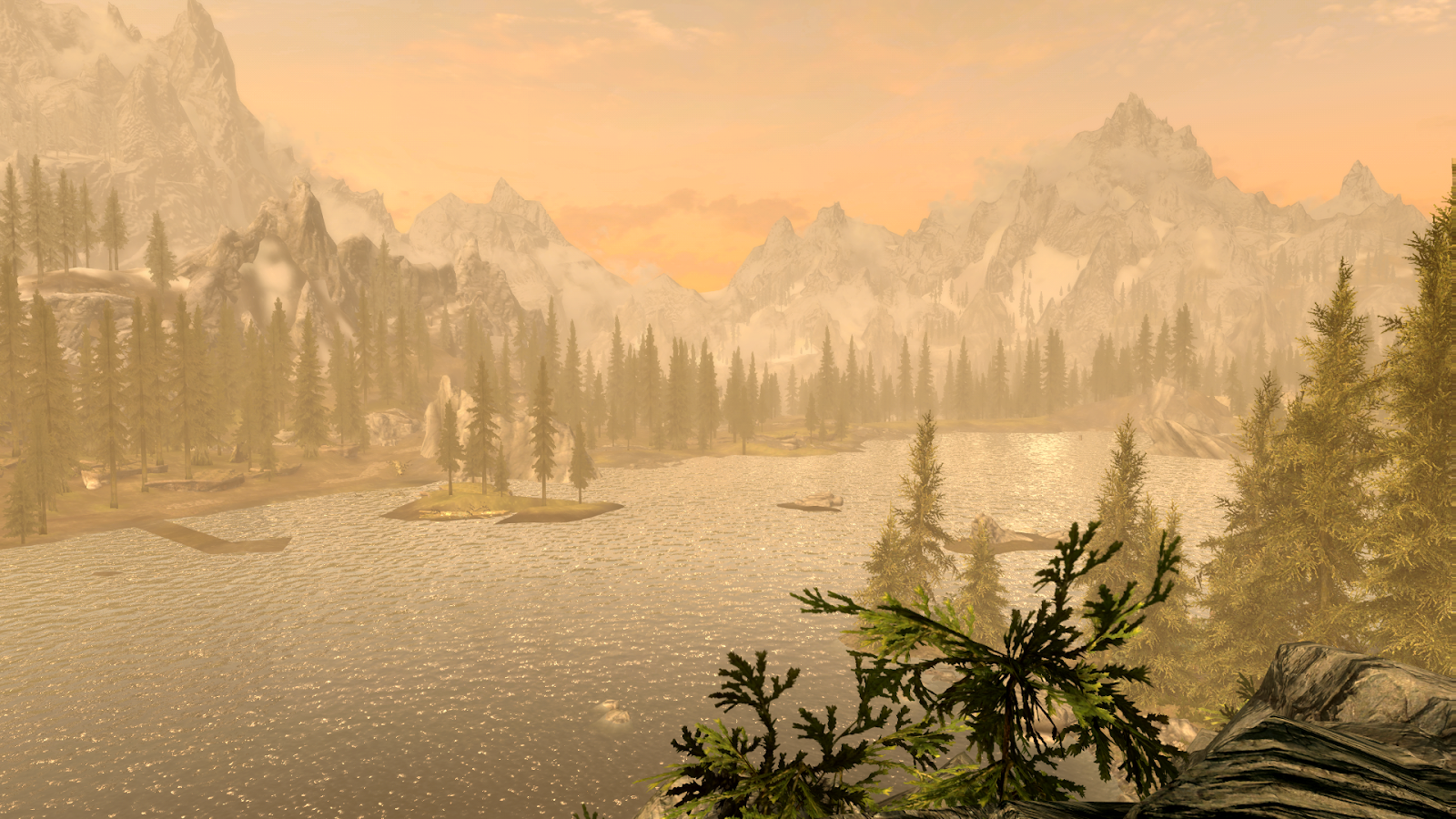 The same beautification did not, unfortunately, extend to the NPC’s that occupy Skyrim. I won’t dwell too long on this but, seriously Bethesda, there are some seriously ugly people in Skyrim. I appreciate that not everyone in your Nordic world is human, but it shouldn’t be difficult to identify who is and isn’t!

Skyrim can be brutal, especially in the early stages. You go through the initial character creation, the bit of storytelling that sets the scene, and then you are just let loose into the world – ready to succeed or fail on your own merits. Venture into an area that is meant for higher levels? You’ll get no warning messages, and it won’t be blocked off to you. Just death. Again and again.

The world of Skyrim seems to call out to you, inviting exploration from the moment you are first freed from Helgen. Dungeons are everywhere, and what can first seem a very small cave very quickly opens out to a sprawling subterranean complex, with plenty of nooks and crannies to investigate.

This being said, the feeling of amazement at the size and number of dungeons can very quickly transition into frustration, and dare I say boredom. While the towns and wilderness of Skyrim are both varied and interesting, dungeons quickly become monotonous, indistinguishable from one another as a result of their almost copied and pasted series of connecting tunnels, samey enemies and predictable loots.

These frustrations come to a head when having to deal with any kind of NPC. I remember getting bloody annoyed with the AI in Fallout 4 for being glitchy – with companions routinely walking into traps, alerting enemies to our presence or consistently and infuriatingly blocking doorways.

Given their propensity to glitch out in Fallout 4, a game I remind you came out four years after the original Elder Scrolls V, it will probably not shock you to hear that the situation is somehow worse with Skyrim.

I cannot enough express my frustration at the AI enough. All too frequently do they trap you in a room or against a wall, or push you along when you’re standing still because their pathfinding lacks the intelligence to walk around you. When conversing with merchants you can be exchanging dialogue when said merchant either walks off, or another NPC just stands in front of you with a thousand mile stare. Because your companions aren’t marked as ‘essential NPC’s’, it is entirely possible for them to die, and in fact it seems to be one of their main party tricks. You can be in a tight corridor when they brazenly charge into battle with nay a regard, then die when you cast a fireball. One time my housecarl actually ran in front of me just as I fired my bow, killing her instantly. The frequency of this is such that you do contemplate leaving their body there, if it weren’t for the loot they were carrying. But as an encumbered player is ridiculously slow, you do end up save-scumming.

Niggles and frustrations aside, it is exceptionally apparent why Skyrim won over 200 Game of the Year awards on the last generation. The sheer size and scale of it, all accessed on a console that by that time would be six years old is a phenomenal feat of engineering. It’s made a very solid transition over to current generation hardware, with no game breaking bugs or crashes encountered. This is anecdotal, but I feel that the game loads quicker than Fallout 4. It definitely doesn’t seem to be such an arduous process entering and exiting buildings.

This is a big question, and I know that there are going to be strong advocates for either brand.

I wrote in my Fallout 4 review that it was the first Bethesda game I had invested any significant amount of time into. Going back to their earlier work gives an insight into the way the developer is heading in terms of design and in many ways it is understandable how somebody could enjoy Skyrim more than Fallout 4. It feels like there are many more character customisation options, including race. Additionally, I found that Skyrim offers significantly more variation in terms of play style and quest approaches. You are free to betray somebody, or kill them if the mood takes you. While in both games you have some autonomy in terms of weapon selection, and whether to favour sneaking or tanking, Fallout felt like you were ultimately always destined to arrive in a location, get into a gunfight, and repeat. Likewise, the decisions you make feel to have more impact. I also disliked in Fallout how they gave you so much backstory, and dictated your overarching objective so blatantly.

For that matter, interactions in the world of Skyrim are a lot more enjoyable than that of Fallout 4. They appear more random, and provide better variation. For example I found myself at one-point interacting with a talking dog who happened to be a companion for a God. These quirky and entertaining mission-types don’t really occur in Fallout.

One of the big announcements for Skyrim Special Edition was that mod support was coming to Xbox One and PS4. That is indeed the case, and already hundreds of mods for PC have been ported over to support consoles, although the PS4 has significantly less than the Xbox One. This is the result of policies implemented by Sony, which forbid creating mods that use external assets – limiting the modding community. Nonetheless, the trend that started with Fallout 4 has continued, suggesting that Bethesda are committed to making console versions of games closer to their PC counterparts. It’s irrefutable that mods are a huge reason that the original Skyrim is still as popular as it is on Steam.

I have personally not yet dipped my toes into modding, simply due to being so swept up in exploring Skyrim. However, if the modding process is as simple as it is on Fallout 4 then I anticipate great things when I grow bored of the vanilla experience.

This was my first introduction to the world of Skyrim and Elder Scrolls in general, and I found myself very impressed with what Bethesda have created, especially considering it’s half a decade ago this game first released. While it has been prettied up, the core mechanics have remained the same, and they are very solid foundations upon which to build upon. There is certainly plenty to enjoy and is a gripping and compelling RPG.

However, despite being exceptionally grateful for finally been able to play Skyrim, and on the latest generation of console, I am left questioning quite why it exists. The graphical upgrades are nice, but the original released only five years ago – not exactly a significant anniversary that warrants a remaster, and a £60 price tag.

This is only further compounded when you consider that both Microsoft and Sony do offer ways of playing last generation games on the latest versions of their hardware – with Microsoft actually allowing you to use your Xbox 360 discs to act as a license to download the game.

Bethesda have stated that a lot of work has gone into the game behind the scenes to make the most of new rendering techniques, and squash some of the more persistent bugs. While I believe that to be true, knowing that they ported Skyrim over to Xbox One before even starting development in Fallout 4 does give pause for thought. A big change comes in the form of official mod support for consoles, which as we have seen on PC’s can drastically improve and prolong a game. But even this is stamped with a big caveat for PS4 users.

PC gamers are possibly getting the best deal, as they get the updated version of Skyrim for free if they have previously purchased it and all the DLC. Yet, they are the ones least likely to benefit from the upgrade, since mods have existed for years that add provide texture upgrades that are better than those Bethesda themselves have released.

It is of course a personal choice. If you have invested hundreds of hours into the previous version of Skyrim, you have to weigh up whether or not mods and improved textures are enough to validate that price tag. However, if you are like me and have never played Skyrim before, this is essentially a must-have for your game collection. Not only is it ridiculously pretty, but the core game is exceptionally intricate and long. You are essentially purchasing a piece of gaming history.

This review was made using a retail version of Skyrim: Special Edition. All images and video were captured in-game using an Xbox One